Reports are out claiming that Atletico Madrid goalkeeper Thibaut Courtois will only return to parent club Chelsea if he is playing regularly. 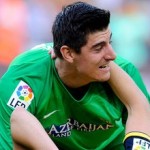 “If I move somewhere, I will play. With my age, what I want, the most important thing for me, is to play.

“We will see what happens. But Petr [Cech] is one of the best goalkeepers in the world, he won the golden glove in the Premier League, and I have a lot of respect for him, so we will see what Chelsea decide and what they plan to do. You guys will see the decision [then].”