Thibaut Courtois Willing To Wait For His Chance At Chelsea 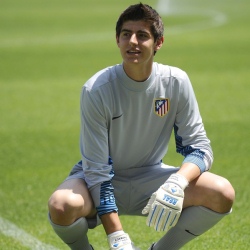 Thibaut Courtois is willing to wait for his chance to rival Petr Cech at Chelsea after making an immediate loan move to Atletico Madrid.

The Belgian goalkeeper suggested that he would be happy to spend up to three years with Atletico Madrid on loan from Chelsea.

Courtois said at his Atletico presentation: “I would like to stay here. I want to focus on having a good season and then it would be great to stay two or three years here,”

Courtois who signed a five-year contract with Chelsea told the club’s official website: “Chelsea is one of the biggest clubs in the world at the moment and gave me the opportunity first to be loaned to another team and then to come back and join the first team squad and then maybe to play there, so it will be a wonderful possibility to play for one of the best teams in the world. That is the reason why I chose Chelsea.”

Courtois said: “I’m very excited. I have to work very hard to show that I’m capable of winning the trust of the coach.”

Atletico boss Gregorio Manzano also has Sergio Asenjo and Joel challenging for a starting berth at the Vicente Calderon stadium.

“I am happy the other day that I could speak with Petr Cech and also I can play at the same club as him in the future because he is one of my idols,” said 6ft 6ins Belgian of the man he is eventually supposed to replace.

“Now I would like to say to the Chelsea fans that I am very happy that I have this opportunity from the club to play for this wonderful team. I hope that when I come back I can help give them a nice future.”