Reports are out claiming that Arsenal legend Thierry Henry has declared they can win the Premier League after victory at Watford. 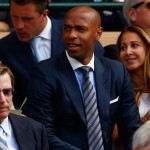 Arsenal stepped up to the plate following victories for both Manchester City – who dispatched of Bournemouth by five goals to one – and Manchester United, to reclaim second spot in the table with a comfortable 3-0 win at Vicarage Road.

“They are in the mix for me,” Henry told Sky Sports.

“Today was a massive response knowing everybody won. Everybody was waiting to see if they could back-up the win against United. Can they do it and maintain it for more than 15, maybe 20, games.

“That’s what we want to see. But they have to play like that all the time. Win games sometimes where – perhaps for an hour – they struggle, and then they come out on top.

“Can they beat, and repeat that against United again against the likes of City, Chelsea – and I know Chelsea are not where they’re supposed to be at the moment, but they’ll be back up at some point.

“Everyone can dream, and I think Arsenal can win the title this year.”