Reports are out claiming that Arsenal legend Thierry Henry has tipped his former side to finally win the Premier League again this season. 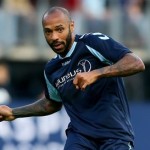 The French icon was part of the Gunners’ last title victory in 2003/04 and believes that the current team have what it takes to win the league again.

Arsenal are on a four game winning run in the league and good performances against Bayern Munich, Manchester United and Watford have sparked excitement that Arsenal might be able to lift the trophy this campaign.

Speaking to the TalkSPORT Henry said: “I genuinely think it is their year. They are getting results against big teams now and are backing up those results after big games. That is the key.”