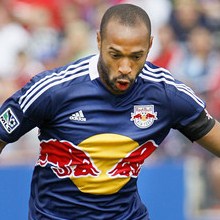 The Arsenal legend was left fuming with the manner of their opening round defeat to FC Dallas.

“That’s what we have to do: Try to avoid doing mistakes,” Henry said.

“But it is kind of difficult to take it when you give them goals and it was the story of the season last season,” the French Designated Player continued. “Hopefully it can happen against Salt Lake, but now we’re going to play against a team that won 3-1 in LA and is already one of the best in this league. So for sure, the first games of the season at their place, they’re going to be fired up.”