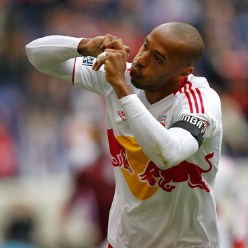 Thierry Henry opened his MLS scoring account for New York Red Bulls with a decisive double in the 4-1 home victory over Colorado Rapids.

The Frenchman, who along with Kenny Cooper scored twice, pounced on an errant backpass from Ross LaBauex in just the third minute to produce a clever left-footed finish before supplying Cooper with a perfect through ball for the ex-Portland Timbers to score his 50th MLS goal on his home debut about three minutes later.

Less than ten minutes into the second half, Henry got on the end of a lovely long ball from Wilman Conde to come up with a customary classy finish before the Rapids hit back in the 77th minute courtesy of Omar Cummings.

But the Red Bulls were not finished there and managed a fourth when Cooper helped himself to his second from close range.

The return to form pleased Henry who had been so critical of his team after they continually made errors in their opening two defeats.