Reports are out claiming that New York Red Bulls striker Thierry Henry has cast doubt on his MLS future. 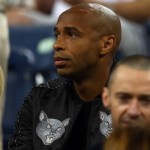 The French icon has been linked with a coaching post at Arsenal this week.

The 37 year old, whose contract with the New York Red Bulls ends next year, told L’Equipe: “Nothing is clear. I have not taken any decision or speculated, it’s not my thing.

“One thing is certain: I will stay in football, to coach, to be a consultant… we’ll see. The second certainty is that I would like to see Arsenal win the Champions League.

The Gunners’ record goal-scorer added: “Whether from near or far, it does not depend on me, but I’d sure like to help. Because this is my club and, as a player, I have not been able to give them the Champions League.”

Arsene Wenger Is A Legend! – Rosicky