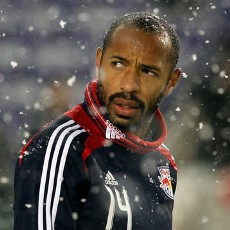 Reports are out claiming that New York Red Bulls striker Thierry Henry is ready to re-sign for Arsenal in January.

It is said that the 35 year old will ­accept a January SOS from Arsene Wenger.

The Arsenal boss has confirmed he is interested in signing the former French international for a third time when the transfer window reopens.

A close friend of Henry has told the Sunday Mirror the striker would find it impossible to resist the lure of his spiritual home, should New York Red Bulls accept the proposal.