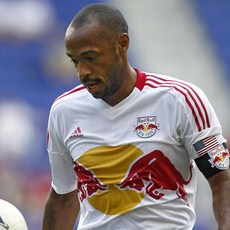 Thierry Henry is hoping that Arsenal can keep hold of Robin van Persie.

However, the French veteran believes Arsenal will survive without the Dutchman.

“We hope it stays, and that’s the way it is,” Henry told Sky Sports News.

“I don’t know exactly what is happening but as an Arsenal fan I want him to stay.

“He is still an Arsenal player and the boss has to deal with it.”

When asked about Van Persie stating he will not sign a new contract, Henry replied: “I’ve got nothing to say about that, you will not get me to be one of the guys talking about the club and the player.

“I just want Arsenal to do well. Robin will do what he will do and we’ll see.

“When I left, everybody cried, but then the year after they went on a run of being eight points ahead. Everyone comes and goes.”

Arsene Wenger Pleased With The Preseason Form Of Serge Gnabry