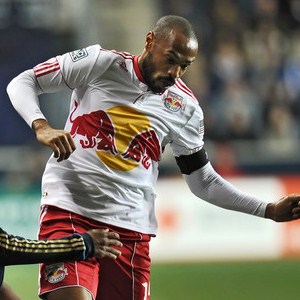 It has been revealed that the injury suffered by New York Red Bulls striker Thierry Henry is slightly worse than first thought.

The 33-year old former Arsenal and Barcelona star has been carrying the problem for a number of years but as he ages it seems to get worse and the Red Bulls are just hoping it does not affect him too much this term.

Head coach Hans Backe : “I must say I feel sorry for him because his Achilles has been a problem for five, six, seven years. But now he’s got so much pain so we just have to take it day-by-day now. He will get his treatment every day,’’.

The Swedish tactician admitted it would be a day-to-day proposition for Henry as the club tries to manage his problem for the good of the playing group.

“Here when we play once a week, you need to train to stay fit and to be sharp. So we just have to see. He’s resting today, yesterday and tomorrow and see on Thursday if he can train or not,’’ added Backe.

“At his age now, playing once a week, you need to stay fit, you need to train. I feel a little bit sorry for him because of this. He’s really trying but of course…he can’t go 100 percent every game.’’