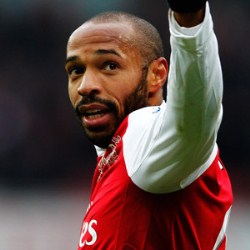 Thierry Henry has reportedly told Arsenal fans he could be back next season.

The New York Red Bulls Striker will return to the US after the Champions League clash at AC Milan.

Asked if there might be a possibility of another return next season, he replied: “You can never say never, right?

“You need to ask the boss. I don’t know. I have always said it, it’s kind of difficult for me to say no.

“If they need some help one day, I will be around.”