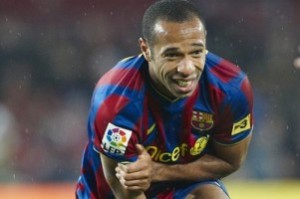 Barcelona and France international striker Thierry Henry has revealed that he will sign with MLS club New York Red Bull.

The 32-year old former Arsenal striker said that he was likely to sign with the club once his contract with Barcelona ends in the European summer of 2010.

It was also said that Henry will make his way to Harrison, New Jersey once he has finished his international duty with France at this year’s World Cup in South Africa.

His signature would be a major boost for the sport in the US, with fellow European stars David Beckham and Freddie Ljungberg having positive influences at LA Galaxy and Seattle Sounders respectively.

Ronaldinho : I Feel The Love And That Makes Me Happy!!