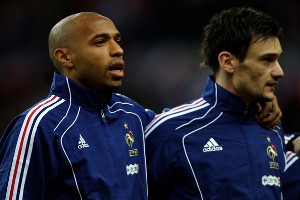 Sensational news are out and it has been reported that Thierry Henry is leaving Barcelona for New York Red Bull.

Local newspapers have reported that the ex-Arsenal hero, 32, has signed a pre-contract agreement to join New York Red Bulls for this season’s Major League season.

The French international striker has been unable to hold down a regular slot at Barca this term behind the likes of Lionel Messi and Zlatan Ibrahimovic.

Henry was a hero at the Gunners with 174 goals in 254 appearances before switching to the Nou Camp three years ago, where he has netted 35 in only 78 games.