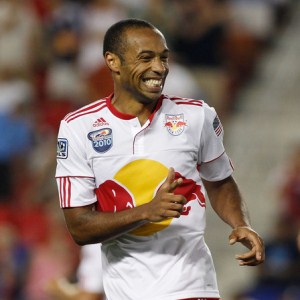 Bad news for all New York Red Bulls fans as striker Thierry Henry has been ruled out of Friday’s MLS clash with the LA Galaxy.

The former Arsenal and Barcelona star has been forced out of the tantalizing clash because of a knee injury and will not travel to Los Angeles with the rest of the squad.

It is said that Henry did fitness and agility work in training on Tuesday but did not partake in drills with the team and will be left behind by coach Hans Backe who confirmed he is struggling with the knee problem.

The injury will deny Henry the chance to compete against David Beckham. The pair were great combatants in the Premier League when Henry was at Arsenal and Beckham at Manchester United.