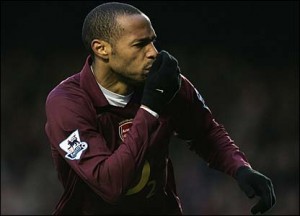 Three weeks after being immortalized in a bronze statue outside Arsenal’s stadium, Thierry Henry was close to sealing an emotional return to the Premier League club that made him a global superstar.

Arsenal manager Arsene Wenger said Friday that the former France captain will sign for the team in a two-month loan deal once an insurance agreement is reached with the New York Red Bulls, Henry’s club in Major League Soccer.

Wenger is turning to Henry, who scored a club-record 226 goals in eight years at Arsenal between 1999-2007, to fill the gap left by the impending departures of Gervinho and Marouane Chamakh to the African Cup of Nations next month.

“To cover for two months is ideal,” Wenger said. “He has the experience and the quality. He knows the club and can help the players on and off the pitch.”

Henry, who has been training with Arsenal during the MLS offseason, established himself as a star in his first stint at the London club before moving to Spanish giant Barcelona. Nicklas Bendtner Not Giving Up On Arsenal Career