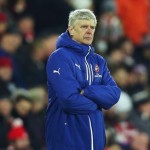 Reports are out claiming that Arsenal legend Thierry Henry has called on Gooners to get behind manager Arsene Wenger.

The French tactician was abused by fans on a train platform after the defeat at Stoke City. The treatment of his mentor, Henry felt, was a “joke”.

Henry said: “Fans do have a voice, I understand that. But what I saw after the Stoke game was out of order.

“You can express that you are upset but to do it in that way was a bit too much. In the game at the moment, unfortunately, that is the way it is.”