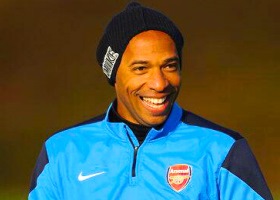 It has been revealed that New York Red Bulls striker Thierry Henry feels Xavi should stay with Barcelona.

The Spanish international midfielder has been linked with a move to MLS this past week.

The Arsenal legend stated at a Puma promotional event : “Xavi can do whatever he wants. For me, given everything he has done for football and Barcelona, he should stay there and spend the rest of his life at Barça,’.

“Xavi can play in the MLS, in France, England, or in my neighbourhood. I think he’s an incredible player. People don’t realise what Xavi has done on the pitch.”

Manuel Pellegrini Eager To Have Fernandinho For Barcelona Clash