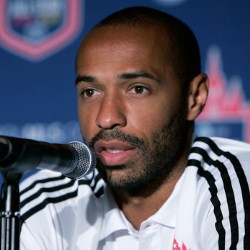 The former Arsenal and Barcelona ace was asked about Manchester United’s pursuit of the Inter Milan star yesterday.

The French international seemed a bit bemused and said the journalist should probably ask Sir Alex the question and not him.

But He then said: “I think Sneijder can be somebody amazing for the league. We’ll see…”