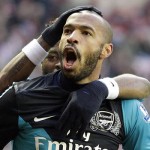 Former Arsenal striker Thierry Henry will not be signing for the club on loan during the January transfer window.

The 35-year-old trained at the club’s Hertfordshire base during November to boost his fitness levels following the end of his MLS season with New York Red Bulls.
Henry returned to the Emirates in a loan deal last year, extending his club record goal tally to 228 making four appearances.

Gunners boss Arsene Wenger appeared keen in recent weeks to re-sign the French forward, particularly considering the departure of Ivorian Gervinho this month at the start of 2013 for the African Cup of Nations.

But speaking after Tuesday’s lacklustre 1-1 draw at Southampton, Wenger ruled out any deal and said: “He is not ready, he has just come back from holiday anyway. At the moment we are not on that case.”