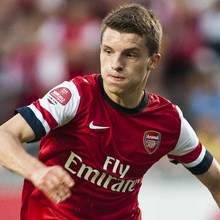 It has been revealed that Thomas Eisfeld is delighted with his progress at Arsenal.

The 19-year-old scored twice on the pre-season tour to the Far East, and hopes his progress will soon earn him a chance in the first team.

Eisfeld told the Official Arsenal Magazine : “I’ve always scored a lot of goals and made a lot of assists,”.

“I think that is important in my position to be able to do that.

“My favourite position is the No 10 role, so attacking midfield. I don’t mind the wings either. But I don’t think playing as a central striker is really my position because I’m not the strongest physically.

“Since I’ve been at Arsenal I’ve learnt how to play the ball quicker and to pass and move with more effectiveness. I have become stronger too.

“Pre-season was really nice and gave me real a confidence boost. I was confident going into it because I know what I am capable of, but I certainly didn’t expect to score two goals. I’m really happy with how it went.”