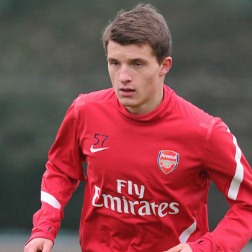 Arsenal signing Thomas Eisfeld is delighted with his move from Borussia Dortmund.

The 19 year old attacking midfielder is clearly one for the future and he is certain he has made the right move.

“I think so because Arsenal is a great club and it is great for young players,” he told Arsenal Player.

“The stadium is amazing, it is great. I am impressed with the Arsenal training centre and I really enjoy the atmosphere here. On Sunday I was at the [Aston Villa] game with my agent and it was great.

“Mr Wenger said to me that I will get the chance to train with the first team and then it is up to me if I play well.”

Eisfeld is following in the footsteps of one of his footballing heroes – Tomas Rosicky.

“I have a shot of Tomas Rosicky in my room and it is fantastic to play with him. I have never met him but in my opinion he is a great player and I focus on his game.

“I watched every game [he played] in Dortmund but I play a little bit differently.”