It has been confirmed that former Germany international Thomas Hitzlsperger has retired from football due to a series of injury problems. 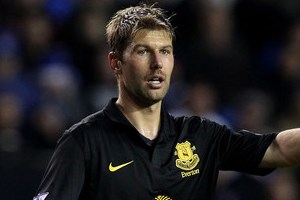 The 31 year old midfielder, known for his powerful shots, played 52 times for Germany, scoring six goals and was a part of the side which finished third at the World Cup in 2006 before going one better and ending as runners-up to Spain at Euro 2008.

A successful club career took in Aston Villa and Stuttgart where he won the Bundesliga title in 2007, before shorter spells at Lazio, West Ham, Wolfsburg and finally Everton who released him at the end of the 2012-13 campaign.

Hitzlsperger told the Suddeutschen Zeitung: “I’ve been sure about it for a few days: I won’t be playing anymore.”

According to Hitzlsperger, his body was giving the “appropriate signals” that it was time to stop.