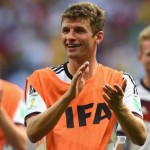 It has been reported that Bayern Munich striker Thomas Muller has confirmed turning down Manchester United over the summer.

The German international star was linked with a move to Old Trafford before September’s deadline and revealed there was interest from United, but insists his decision to stay at the Allianz Arena wasn’t difficult.

“I know there was interest, but Man United were interested in a lot of players this summer,” he told The Guardian.

“It never really got anywhere because I had just renewed my contract [until 2019], and Bayern were clear that they saw my future here. The decision for me was an easy one.” Number 7 to Owen and No More Signings?