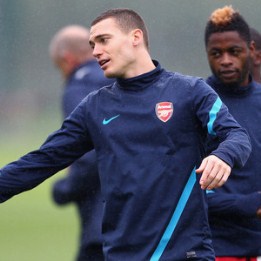 Arsenal defender Thomas Vermaelen believes that it is too early in the season for Arsenal’s Barclays Premier League clash with Manchester United to have a major impact on the title race.

The Gunners travel to Old Trafford on Sunday already five points adrift of their opponents after just two games.

Defeat would see champions United open up an eight-point lead over Arsene Wenger’s men and would doubtless prompt some to write off Arsenal’s title hopes for another year.

However the Belgian international said: “If you’re going to talk already about the title, it’s a little bit early.

“We’re only two games started and it’s a long, long way to the end of the season, so I don’t think you have to talk about the title.”