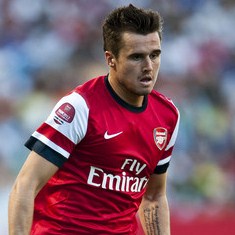 Thomas Vermaelen has hailed the progress of fullback Carl Jenkinson this season.

The 20-year-old lifelong Arsenal fan joined the Club last year from Charlton Athletic, having only made eight first-team appearances for the Addicks.

“Carl had another fine game on Sunday [against Manchester City]. I even heard that he was trending on Twitter!” Vermaelen said in the Official Arsenal Matchday Programme.

“It’s really important for any player to keep improving – there’s nothing worse than standing still, and it’s really obvious that Carl is making big steps every single week.

“He’s playing better and better, and I’m very pleased for him.”