It has been reported that Arsenal defender Thomas Vermaelen is happy Tomas Rosicky is staying. 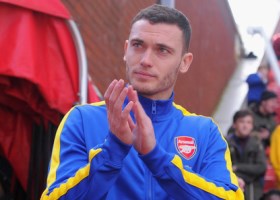 The Belgium international centre back was delighted to see the 33-year-old commit his future to the Gunners and believes his remains a key member of Arsène Wenger’s squad.

“I know him now for a long time, I like him a lot and I’m very happy that he has signed a new contract,” the captain said in the official Arsenal matchday programme.

“For me, you talk about big players who come to the club like Ozil or Santi and they are technically incredible players. But for me, Rosicky is technically almost perfect.

“His basic technique is always good and it is such a nice thing to see on the pitch or in training. His first touch is incredible, he rarely makes a mistake.

“He is also very quick over the first few metres and puts pressure on players, he is a clever guy tactically and knows when to go or not to go. He really is very important for us.”