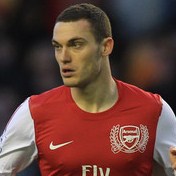 Thomas Vermaelen has admitted that he enjoys his leadership role at Arsenal.

The Belgian international centre back was appointed second in command to Robin van Persie last summer after recovering from an injury-hit campaign in 2010/11.

“When the boss made me vice-captain it made me proud,” the defender told Arsenal Player.

“I am really happy to be vice-captain of such a big club like Arsenal.

“I feel the responsibility to help the captain in his role as well, and of course that means the Club and the boss give you a lot of confidence.”