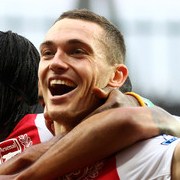 Thomas Vermaelen revealed that he thought long and hard about signing a new deal with Arsenal.

The Belgium international admitted he thought carefully about the decision but says there was plenty at Arsenal to convince him to stay.

“I thought about it really long and of course I knew there were some doubts about my club,” he told arsenal.com.

“For me the most important thing is that I feel happy at the Club.

“Another thing is that I have only really played one year because I was injured last year and I wanted to give something back to the fans.

“I felt like for me I was not done here. I still believe in the Club, I think the structure is really good and these are the main reasons why I stayed.

“I think people think that if things are going difficult it is going to be better at another club.

“For me if it’s not going as you wanted at the beginning it doesn’t mean you have to quit. It’s always easy to quit and go somewhere else. I feel there is some belief in this team.”