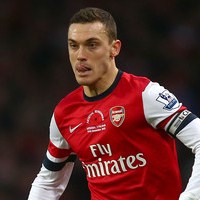 Arsène Wenger says that Thomas Vermaelen will remain as Arsenal’s club captain, even though there are doubts over whether he will be fit for the beginning of the season and his ability to force himself into the starting XI.

The central defender was dropped for the Champions League win at Bayern Munich in March and he found himself on the fringes for the final 10 Premier League matches, as the manager preferred to partner Per Mertesacker with Laurent Koscielny. Only once, when Mertesacker was suspended for the home win over Norwich City, did Vermaelen start.

Vermaelen also struggled with a stress fracture to his back towards the end of last season and he has aggravated the problem, meaning that Wenger has not taken him to Asia for the club’s pre-season tour.

“It depends,” Wenger said. “I cannot stick with him now because I think he will miss the start of the season. But certainly, he will still be the club captain. He had a back problem. He came in with it and he couldn’t practice until now. He’s out for how long we don’t know. There is nothing behind that at all. There is no bad feeling because he didn’t play at the end of the season. It’s just an unfortunate injury.”