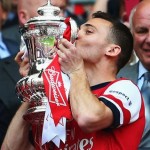 It has been reported that Arsenal skipper Thomas Vermaelen will not make a decision over his future until after the World Cup.

The Belgium international centre back has struggled for match action this season, but insists the World Cup is his priority for now.

“I am not thinking beyond that. Next season is the future and we will see about that,” he told The Sun.