It has been reported that Manchester United skipper Wayne Rooney was happy to get their season off to a winning start against Tottenham today. 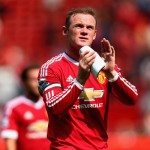 United won 1-0 thanks to a Kyle Walker own goal, but Rooney was happy just to take the three points.

“We’ve played a lot better,” he conceded. “But today was about the three points.

“Thinking back to last season and losing (against Swansea City) and then going on a run of poor results, it was good today to win and get the three points.

“That’s all we could ask for and that’s what we’ve done today.”

Rooney added: “We’ve still working on things. Its been a short preseason. But we’ve worked hard and that’s help us get the three points today.

“We’ve now a few days to review the game today, to see what we did well and what we did bad. And we can start preparing for Aston Villa.

“It was a big victory for us today.”