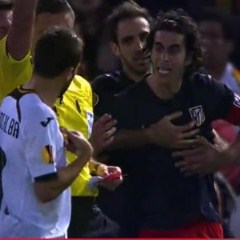 Late on there was a ridiculous incident that saw Tiago given his marching orders, the Portuguese losing his head after a bizarre ‘penalty’ incident: after a high ball into the Atletico box, the referee was alerted by the assistant to a handball in the area.

Pointing for a free-kick to Atletico – Tino Costa had handled – both sets of players mistakenly believed he was signalling a penalty, as Tiago’s arms were also raised. In fact he had done nothing of the sort, but a mass fracas developed that saw both sides engage in the kind of handbags normally reserved for a Friday night in suburban England.

During the shenanigans, Tiago slapped Soldado, while Alba hurled himself to the deck feigning assault: Tiago was dismissed, led away by his team-mates as Simeone tried to calm his charges, while Alba was booked for his embarrassing tumble.