Everton goalkeeper Tim Howard has declared that they will be up for their clash with Manchester City. 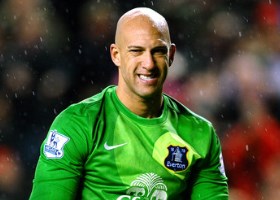 They could do neighbours Liverpool a huge favour by taking points off City, which would give the Reds renewed hope of winning the title for the first time in 24 years.

The USA international told the Liverpool Echo : “Hopefully we’ll brush it aside as a one-off and we’ll have it all to do against Manchester City,”.

“It will be wide open, a tactical battle with top players on display.

“Those games take care of themselves. Those are the easy games to play in.

“Gareth Barry (on loan from City) won’t be there but we can cope.”