Tim Howard insists Everton will not feel pressure from Arsenal in the race for fourth place after a battling 1-0 success away to Sunderland. 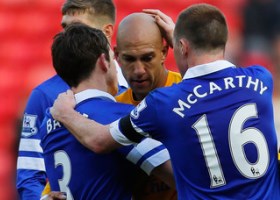 A Wes Brown own goal made it seven straight wins for the Toffees to climb above Arsenal and into the final UEFA Champions League spot.

The USA international said in the Liverpool Echo : “You don’t mind it being a bit scrappy every now and then because you almost want the confirmation that we’ve got it in us,”.

“We know we can play good football but we never want to get away from that Everton fighting spirit, that ability to dig in. Games like this remind us that’s still in us which is important.

“Even at 1-0 down they kept coming because they had a lot to fight for and it was a really tough game.”