It has been reported that Tim Howard has been named the US Soccer Male Athlete of the Year for 2014. 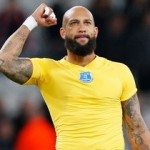 The 35-year old Everton goalkeeper has been rewarded for his brilliant national team form during the calendar year to land the prize for the second time in his career.

“It’s an honor. I know the winners on the list who have come before me, so it’s special to have my name up there with the greats,” Howard said on ESPN’s SportsCenter.

“The whole ride with the team for about a month and a half, when we got together for training camp and we flew down to Brazil, we had a really good time and that made 2014 so special to me.”