It has been reported that Everton goalkeeper Tim Howard has taken aim at Manchester United’s players over the sacking of David Moyes. 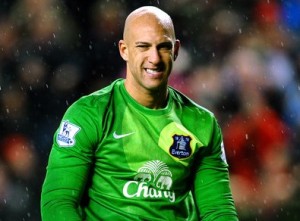 The 35 year old USA international says that Roberto Martinez was able to succeed to spectacularly in his first season at Goodison Park partly because of the squad he inherited from Moyes, but hinted that Sir Alex Ferguson may not have extended the former Preston boss a similar courtesy.

Howard told the Sunday Express: “David Moyes built up an incredible squad [at Everton] and we’ve kicked on from there partly because of the strong squad that he had left and also because of the signings that Roberto Martinez brought in.

“What happened at Man United, I don’t know. I wasn’t inside those doors. I was on the outside like everyone else looking in.

“What I do know is that David Moyes is a fantastic manager and he’s shown that.

“I think when something goes wrong at a football club there’s a hell of a lot of pieces that need to be looked at and unfortunately, in professional sports, we know the name of the game: You can’t sack 22 players in one day, can you?”