Reports are out claiming that Tim Krul was maintaining a positive outlook despite being ruled out for the rest of the Premier League season. 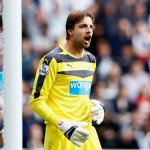 The 27-year-old sustained a ruptured cruciate ligament in his right knee during Holland’s 2-1 win over Kazakhstan in Euro2016 qualifying on Saturday.

Scans revealed the extent of the damage, which is likely to sideline Krul for the remainder of the campaign, and the shot-stopper is devastated with the news.

However, the Dutchman sent a message to the club and its supporters regarding their substandard beginning to the season and how he is confident the Magpies will be able to turn it around.

Davide Santon : I Am Happy At Newcastle United!