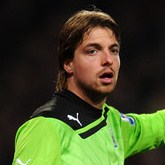 Tim Krul has played down his clash with Arsenal captain Robin van Persie on Monday.

A simmering row between the two Dutchmen boiled over during the closing stages of the Magpies’ 2-1 Barclays Premier League defeat at the Emirates Stadium on Monday night after Thomas Vermaelen snatched victory for the Gunners in the fifth minute of injury time.

Krul was keen to draw a line under the incident but told the club’s official website: “I was disappointed with the incident involving Robin. ”

“We are playing in arguably the best and toughest league in the world and things like this happen.

“There is only one thing on my mind during a game and that is to win.”

Alex Oxlade-Chamberlain Happy To Be Compared With Steven Gerrard