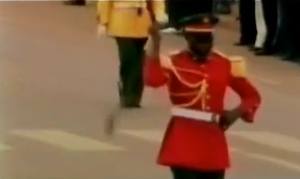 “Tsamina” or “Zangaléwa” is a 1986 hit song, originally sung by a makossa group from Cameroon called Golden Sounds who were beloved throughout the continent for their silly dances and costumes. The song was such a hit for Golden Sounds that they eventually changed their name to Zangaléwa, too.The song pays tribute to African skirmishers (a.k.a tirailleurs) during WW2. Most of the band members were in the Cameroonian Army themselves and used make up, fake belly and fake butt for comic relief.
The song is still used today almost everywhere in Africa by soldiers, policemen, boy scouts, sportsmen and their supporters, usually during training or for rallying. It is also widely used in schools throughout the continent especially in Cameroon as a marching song and almost everyone in the country knows the chorus of the song by heart. The song was also popular in Colombia where it was known as “The Military” and brought to the contry by West African DJs.
The men in the group often dressed in military uniforms, wearing pith helmets and stuffing their clothes with pillows to appear like they had a swollen butts from riding the train and fat stomachs from eating too much. The song, music historians say, is a criticism of black military officers who were in league with whites to oppress their own people. Or at least, some of it was. The rest is Cameroonian slang and jargon from the soilders during the war.

Meaning of the words in Fang language: