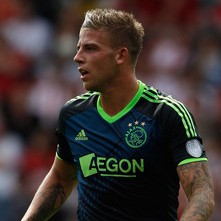 It has been reported that Ajax defender Toby Alderweireld is hoping he can one day follow in the footsteps of fellow Belgians Thomas Vermaelen and Jan Vertonghen.

The 23-year old has recently been linked with a shift away from Amsterdam and although he is happy for now, he has revealed he would love to eventually join a club such as Arsenal or Tottenham just as former Ajax stars Vermaelen and Vertonghen have done in recent years.

The Belgium international told AT5 : “If the time is right, it will come, but now Ajax is the most important thing,”.

“Therefore I expect that I can be watched in the (Amsterdam) ArenA after the winter break.

“Ajax is a very nice club. It won’t be hard to play here all my life – but if I had to choose it have to be a nice club like Ajax again and there aren’t many of them.

“But a club such as Arsenal or Tottenham. They are fantastic clubs and would be a step forward.”