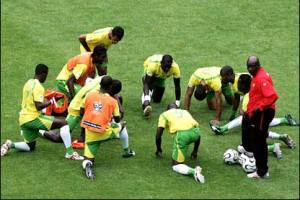 The Togo national team bus has been machine-gunned by Angolan rebels on the Congolese border ahead of the African Cup of Nations.

It has been reported that two players are injured and a Togolese sports ministry spokesman in Lome said that the bus driver had been killed in the attack. The Sparrow Hawks are in the country ahead of the African tournament, which gets under way on Sunday.

Others reported injured are an assistant coach, a doctor and a journalist who was following the team. Alaixis Romao, the Grenoble player, told reporters that he could count seven people injured.

According to reports, the attack happened around 3.15pm just after players entered Cabinda, one of the four host venues of the African Cup of Nations.

Rebels have been fighting for independence in the oil-rich area of the country.