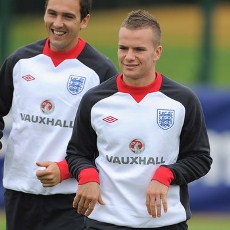 The Daily Mail says Ryan Giggs will miss Sunday’s derby against local rivals City after picking up a hamstring injury.

But United boss Sir Alex Ferguson looks like he might well have a handy replacement however, with Cleverley set to return to the team.

Cleverley has spent six weeks on the sidelines after spraining ankle ligaments during United’s 5-0 win at Bolton.

While United were on Champions League duty in Romania this week, Cleverley underwent three days of intensive solo training.