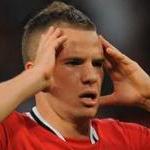 Manchester United midfielder Tom Cleverley may have broken his foot after what manager Alex Ferguson said was a bad tackle from Bolton Wanderers captain Kevin Davies in the champions’ 5-0 victory on Saturday.

Cleverley left the field in the opening minutes of the match, with United scoring their first goal while they had 10 men on the pitch while he was being assessed, and Ferguson fears the worst.

“Tom may have a broken bone in his foot,” Ferguson told MUTV. “It’s a bad one and it was a bad tackle.”