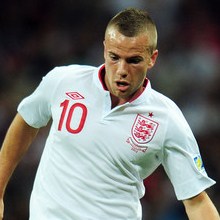 The 23 year old England international was delighted to score his first goal for the Red Devils in their 2-1 win over the Toon, which has set them up with a fourth round clash against Chelsea.

He told talkSPORT : “I’m thrilled that I’ve not only scored but I’ve helped win us the game,”.

“I’ve always scored goals on loan so it’s something that has been bugging me that I’ve not [scored] for my club or my country.

“I’ve always thought that when that goal goes in they’ll all come at once so hopefully that’s the case.”