Tomas Rosicky has admitted that Sunday’s 1-0 win over Tottenham was an extremely pleasing result. 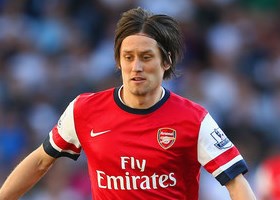 Arsenal scored early through the Czech Republic international at White Hart Lane to take the honours for the second time in the North London derby in the Premier League this season.

The victory was Arsenal’s third over Spurs this term, including the FA Cup, and Rosicky said it was a great feeling to score as his side gain got the better of their rivals.

“It’s one of the best, against Tottenham as well,” he told Sky Sports.

“I’m delighted by a goal like that and most importantly we won the game.

“It’s a great result for us. These derby games are always very tough. It means a lot for us, obviously for our fans as well. We are delighted.”

Arsenal will travel to league leaders Chelsea next weekend as they look to bridge their four-point gap with the Blues.