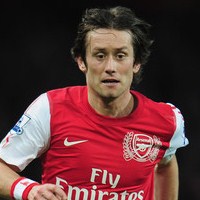 Tomas Rosicky has urged Arsenal to stick together in their battle for a top four finish.

Rosicky believes that with the Gunners in pole position to claim fourth place in the Premier League, they must demonstrate their unity for the rest of the campaign.

“The outside world will try to separate you, they smell blood, so we have to stick together and for the rest of the season fight for fourth place,” Rosicky told Arsenal Player.

“We are there right now so we want to keep that position. Togetherness is very important; we can’t be influenced by the outside.

“We have the quality to [finish fourth], there’s no doubt about it, but we have to avoid performances like those last week.” Wenger Dismisses Gerrard Claim That Suarez Too Good For Arsenal