Reports have surfaced claiming that Bayern Munich midfielder Toni Kroos was proud of his performance in victory over Champions League opponents Arsenal. 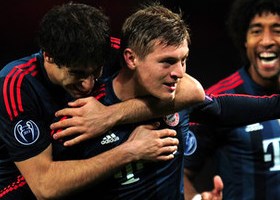 The German international midfielder was watched by Manchester United manager David Moyes on the night.

He said: “We rode our luck in the first 15 minutes, especially with the penalty.

“We’re well aware it’s not over by a long chalk, as we saw last year. It was a step in the right direction but we’re by no means through yet.” Stoke Not Giving Up On Arsenal, Chelsea Target Giannelli Imbula