It has been reported that Bayern Munich midfielder Toni Kroos ducked questions about a move to Real Madrid yesterday. 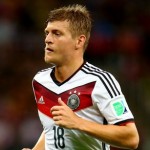 With Germany preparing for their World Cup quarterfinal, the 24 year old was asked about talk of an agreement with Real.

“Now’s not the time to talk about that sort of thing. My mind is focused on Germany and the goal of winning the World Cup. That’s what’s important right now,” said Kroos.

“I’ve got a contract with Bayern ’till 2015 and over the last five months I’ve had plenty of similar situations. When it’s not Real, it’s United. They’re great teams, just as Bayern is. If there’s a decision to be made, it’ll be after the World Cup.”