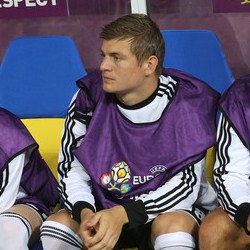 Toni Kroos believes he should have been given a more important role for Germany following his performances during the recently-completed season.

The Bayern Munich midfielder came on in the 87th minute of Germany’s opening 1-0 win against Portugal while he played the last nine minutes of the 2-1 success over Holland.

“”It is not satisfying,” he said. “Especially after the season I had, it would only be logical that I want to play.” ”

The 22-year-old believes he could improve a Germany side who may have won their first two matches, but have hardly impressed in doing so.

“We have won twice, but I would not say that we have played excellent football,” Kroos told the Tz newspaper.