It has been reported that German legend Gunter Netzer is warning Toni Kroos not to price himself out of staying with Bayern Munich. 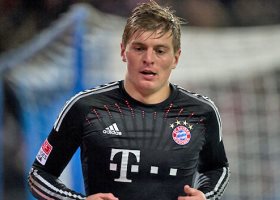 Bayern have told the German international to drop his new contract demands, despite the pressure of Manchester United and Manchester City.

Netzer says: “His salary demands do not correspond to his actual value.

“The club is looking to the future and they apparently do not want salaries to get out of hand.

“I advise him not to overplay his hand. He can be very successful at Bayern Munich.”